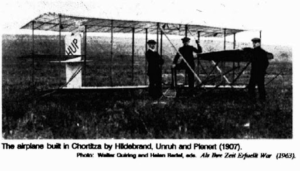 Although the Wright brothers have a name that is famous around the world for their successful invention and creation of the first airplane, the Kitty Hawk, they were not the only aeronautic innovators of their time. Most Canadian and Mennonite people would be surprised to learn that in 1907 a small group of men in the Mennonite colony of Chortitza, Ukraine developed, created, and successfully flew what is likely the very first glider and airplane in Russia!

The name of this marvel of engineering innovation was HUP, which is acronym made up of the last initials of the three aviation pioneers: Kornelius Hildebrand, Peter Unrau, and Henry Plenert.

The name also serves as a double entendre as HUP in German is translated as hop and indicates both a leap forward in Mennonite aeronautic engineering and also as the ability to glide in little hops over the countryside.

What is truly engaging about this story, besides the intrinsic historical value of the aviation information, is the way it demonstrates a few central Mennonite values of ingenuity, hard work, efficiency, and the willingness to be counter-cultural. They overcame the natural geographical problems of the flat Russian steppes by attaching two horses to pull the glider, which were then cut loose after generating enough lift for takeoff. The inventors demonstrated the Mennonite work ethic and efficiency by pooling their resources and talents to personally design and build the glider themselves. Finally, the aviators were willing to go against the cultural current by countering the “men with wings” philosophy and show that humans could really fly (with a bit of technological help).

In 1907 these men set about transforming their HUP glider into a functional airplane named the HUP II. The three college students personally built the four-cylinder air-cooled motor, the wings, and the fuselage themselves. The only part they had to order was the propeller from Germany, which was so expensive that the plane once again had to forego wheels and rely upon skis and horses for takeoff.

A picture of the HUP airplane is shown to the right that was taken from the Mennonite Archival Image Database (MAID), which is sponsored by the Mennonite Heritage Archives.

To read the full article written by Peter L. Neufeld visit the Mennonite Heritage Centre’s own magazine the Mennonite Historian (Vol. 17 No. 1) or you can download the PDF version here: http://www.mennonitehistorian.ca/17.1.MHMar91.pdf.