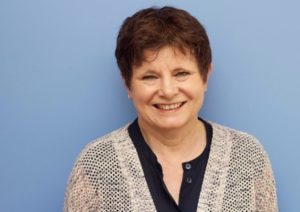 Connie Wiebe reflects on 26 years at the Mennonite Heritage Archives.

For twenty-six years, this mother, grandmother, and farmer’s wife greeted everyone from international academics and researchers to local visitors looking for family connections with a cheerful smile and a good word, whether in person or on the phone.

Connie Wiebe helped individuals, families, and churches find what archivists call “records.” But the word “records” belies what they really are: stories of life, love, family, and faith as told in letters, photos, and sometimes artifacts. Each visitor Wiebe encountered was a story archeologist, looking to unearth and interpret the meaning of their histories.

The bones of Mennonite people who survived migrations, famines and wars are buried under engraved tombstones with the briefest of epitaphs. But this is not where their legacy lives on, said Wiebe.

The Mennonites who helped turn the Canadian prairie into the bread basket of North America shaped schools, congregations, disaster and relief organizations, are more truly preserved in file folders and boxes. Their life stories are commemorated in handwritten German script, typeset Gothic typefaces, and government documents, often in the Russian language. Many remain in basements and church storage closets, passed on through the generations.

It is the progeny of these ancestors and repeat visitors who first encountered Wiebe as the face of the MHA. Here she met and made friends, encouraged them when illness struck and loved ones were lost, celebrated their weddings and the births of children and grandchildren. That’s the kind of thing one can do with a long-term presence; for Wiebe, it became a sort of pastoral role, wrapped up in guest reception, way-finding, and hospitality provision.

While discretion prevents her from sharing details, Wiebe recalls with heartfelt fondness the elderly man who arrived one day looking for traces of his lost love from decades ago. The women was found and contacted by archives staff, but declined contact with the lonely man from her past – a love story unresolved.

There were families looking for long lost relations: siblings, cousins, aunts, uncles, often separated by world events over which they had no control – and tales of joyful reunifications. In a few cases, cradle Mennonites adopted into non-Mennonite families as children arrived at Wiebe’s desk looking for clues to their heritage or biological family. Others arrived seeking the genealogical history of their ancestors, on a quest to understand what shaped their parents and  their own identities.

And books. So many books have been shaped and fleshed out by researchers, academics, and family historians with Wiebe’s way-finding help. As knowledgeable as any assistant a researcher could hope for, the compassionate, tiny-framed Wiebe helped innumerable authors quickly and efficiently retrieve important documents stored on towering shelves in a high-ceilinged vault the size of several school classrooms.

In a north-facing study room lit with large windows at the archives, students of history at Canadian Mennonite University found themselves sharing life challenges with the maternally inclined Wiebe, who says she often put on her mothering hat to coach and nurture young adults trying to figure out their path in life. As a student supervisor, the mother of two daughters, a son, and now a grandmother of five, says “Interacting with them was a natural fit for me because my children had attended CMU and were maybe five to ten years older than the [students] were, so I often was there listening to their woes and issues, giving motherly advice, and they kept coming back, [and] they wanted to come back.”

Having worked with five different directors over the years gave Wiebe a bird’s eye view of an archival evolution.

Within a month of her arrival in August, 1992, then director Lawrence Klippenstein left to take on an MCC assignment, leaving her to learn the ropes on her own. Peter Rempel was hired part time, and with Wiebe also being part-time, the two alternated work days to keep the doors open to the public five days a week.

She reflects with pride on many developments. Ken Reddig arranged for an unused space in the building to become a Mennonite-themed art gallery around 1998 which remains curated and directed by artist Ray Dirks to this day. In this phase of the building’s use, Wiebe became passionate about the faith-themed stories told and shared by innumerable artists who passed through the space, devoting many volunteer hours to events and exhibit openings. Traffic through the gallery strategically helped build awareness of the archives, a mutually beneficial arrangement.

With a gift for computer technology, Alf Redekop led the archive through an immensely demanding period of change that indexed and digitized hundreds of thousands of records of publications such as the now defunct Der Bote German language paper. This was a period with a steep learning curve for Wiebe, who had grown accustomed to thumbing through paper files.

Korey Dyck was part of the effort to establish the increasingly popular Mennonite Archival Information Database online – or MAID. The site holds thousands of historical images and records, with more coming online every week. Dyck also partnered with other Mennonite church organizations to offer archival storage of important historical documents that had languished in the basements of churches’ and members’ homes, like the Evangelical Mennonite Church. All of this, Wiebe says, was accomplished during a time of deep financial uncertainty due to a restructuring of the archive’s then sole owner, Mennonite Church Canada.

For more than two decades of her twenty-six years, Conrad Stoesz, who began as a part-time archivist in the late 1990s and today leads the archive’ programs, was a constant and steadying presence for Wiebe. Stoesz was there to lean on through the challenging and celebratory times, for which she retains an enduring fondness. Her time with the archives and gallery sadly ended prematurely due to a serious illness from which she has now returned to health. These days she is content to be an active grandparent and volunteer in her congregation’s leadership.

Wiebe has no regrets of her prolific life of service at the MHA, but she does share one lament:  many congregations under-appreciate the value of a church-based archive like the MHA. Currently, only about 25 per cent of Mennonite Church Canada congregations regularly send their records. Such records often reveal innovative uses, said Wiebe, recalling pastors who would come to research a congregation in preparation for accepting a new position, or learning about what shaped a congregation’s past and current identity. In many cases, such records stored in churches have been lost, destroyed, and even burned in fires. Some may languish in the homes of senior church members. She wonders what will become of these stories.

As a committee member in her own congregation, she relates a recent meeting where members wondered how they would ever find certain historical documents that might inform a current decision. Because her congregation had regularly submitted its records to the MHA, Wiebe knew precisely where to look. Still passionate about congregational history, she urges churches to send yearbooks, annual reports, and church bulletins to the MHA. Though these documents can seem dull and valueless to the contributor, they are a treasure trove for historians who will tell the story of a faithful people to future generations.

Our conversation ends as Wiebe’s husband Kurt enters the room with a grandson in tow. Wiebe is deeply grateful for the relationships and friendships that overlapped, work, church, and family that enlarged her circles of love and care, but now is a time to re-focus on her own, immediate family.