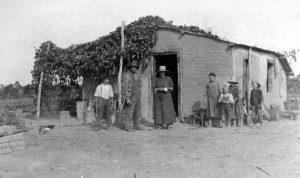 This blog entry contains the conclusion to the story of how Samuel McRoberts’ photograph collection made its way to the Mennonite Heritage Centre Archives.

On November 28, in 1926 279 families comprised of 1,785 Mennonites left Canada and immigrated to the chaco in Paraguay.

Unfortunately, due to complex immigration procedural delays the land was not surveyed in time for the new immigrants to make their settlements. The result was that the Mennonites were forced to live in cramped, makeshift shelters that suffered from unsanitary conditions, which resulted in the spread of diseases like typhoid that killed 187 people. Following the unfortunate incidents, 371 Mennonite immigrants gave up on their plans to settle in Paraguay and moved back to Canada by the end of 1928, some two years later.

McRoberts played a crucial role in expediting the surveying, selection, and sale of land so that the new Mennonite colonies could be established.

Fred Engen was a land scout that worked with McRoberts in helping the Mennonites emigrate. Engen wrote the captions for the photos with the intention of convincing more Canadian Mennonites to immigrate to the new colony. Below are two of the photos of the newly created Menno Colony that were designed to show how the community was flourishing.

These photos were eventually inherited by McRoberts’ great grandniece who decided to donate them to the Mennonite Heritage Centre so they would be preserved for future generations to view.

Over time these photos began to deteriorate due to acidic glue that was used to affix them to pages in the photo albums. Thanks to the work of Ms. Irma Sulistyorini, an international volunteer currently working in the Mennonite Church Canada communications department, the Mennonite Heritage Centre has been able to restore the photographs to their original state.

If you are interested in viewing this collection of photographs please visit the Mennonite Heritage Centre Archives at 600 Shaftesbury Blvd, Winnipeg, Manitoba.

To read the full story you can view Conrad Stoesz’s article in Volume 40 Number 3 in the Mennonite Historian here: http://www.mennonitehistorian.ca/ or read his article on the Plett Foundation website here: http://www.plettfoundation.org/articles/general-samuel-mcroberts-photos-… .

You can view some of the McRobert’s photos here: http://archives.mhsc.ca/samuel-mcroberts-photo-collection.