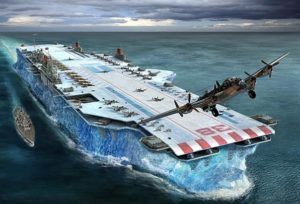 Most people are surprised to learn a group of Mennonite peace-loving conscientious objectors (CO) were unwittingly involved in an experimental military project codenamed Habakkuk to build the largest warship ever made. Even more surprising – this ship was going to be made of a special almost indestructible type of ice called Pykrete that was designed to survive bullets and bomb blasts, which would enable it to brave the perilous Atlantic waters during World War II.

An artist’s conception of what the ice ship would have looked like.

The ship was intended to function as a massive aircraft carrier. Plans outlined a ship that was to be 2000 feet long, 300 feet wide, weigh two million tons, and displace twenty times more water than the largest aircraft carrier today.

The project was named after the Biblical book Habakkuk, and referred to in chapter 1 verse 5 that proclaims, “Look at the nations and watch and be utterly amazed. For I am going to do something in your days that you would not believe, even if you were told.” How ironic that Christian Mennonites who objected to the war for religious reasons were tricked into participating in a military project, that was itself named after a Christian prophecy.

Mennonite conscientious objectors were enlisted to build a 1:50 scale model of this ship to test the feasibility of this ambitious endeavor. The project was undertaken at Jasper Lake in Jasper National Park, Alberta, Canada. Although only a model, this ice ship was projected to be 60 feet long and weigh 1000 tons.

Below is a picture from the Alterative Service website of conscientious objectors sawing ice from the lake to make the ship:

Henry Martens, a CO from Coaldale, Alberta described his role in the project.

“The purpose for constructing this floating solid ice building mystified us COs and made no sense. Only after the war did we discover that we had been engaged in a highly secret war effort, for which we might have refused to render service for reasons of conscience if we had been told. It was a trial floating ice pad which, if built large enough, could have served as a landing strip for aircraft somewhere in the ocean.”

To read more the Habakkuk story as it relates to Mennonite CO’s check the full story here: http://alternativeservice.ca/service/camps/work/habukkuk.htm.