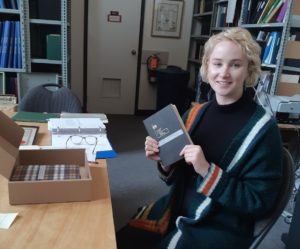 At age 25, John Lynch, a clothier who grew up on a farm in Latton, Ireland, found himself in Manitoba to start a new life in 1950. He had already witnessed the Three Years War that led to Irish independence in 1937.

Lynch choose Canada on the “spur of the moment” because he had an uncle and aunt in Portage la Prairie, according to granddaughter, Katie Lynch. What, if anything, he knew about Mennonites or their history is unknown. Certainly, his granddaughter is learning a lot more.

Katie, a history student at the University of Manitoba, is the first Irish Catholic to work at the Mennonite Heritage Archives (MHA). Her summer term position is thanks to a Young Canada Works grant supported by the Government of Canada through the Canadian Council of Archives.

Katie speculates her interest in history began with a visit to her grandfather’s farmstead in Ireland at age 14. A second visit at 21 further animated her interests. Hearing stories from her grandfather and then exploring castles, faerie rings, and the Hill of Tara—the ancient burial and sacred ground has monuments dating back to 3,200 BCE—had her “googling info about them before and after visiting,” she said.

“History from below” is how Katie, now age 23, describes her particular focus and interest as part of her broader curiosity about what an archivist does. The collections at the MHA are especially useful to her focus. These social history perspectives bring life to what everyday people were doing, “the ones who have been left out of history, what their everyday life was like, especially women. Here you really get that,” she said.

When MHA archivist Conrad Stoesz wrote the grant application for the job, he was especially interested in revealing the lives of Russian Mennonite women whose traditional roles as mothers and homemakers often are confined to a narrow view. Nothing could be further from the truth, says Stoesz. The history of women ‘from below’ is broader, richer, and more diverse than many people think. It’s part of an archivist’s job to lift up the remarkable stories that would otherwise remain silenced.

The history of the Mennonite community is entirely new to Katie, who appreciates the warm welcome she has received. Being non-Mennonite, she is able to bring a fresh look and perspective in her examination of diaries, photos, and stories of Mennonite women.

Katie speaks with a hushed awe about her analysis of LaVerna Reimer Klippenstein’s records (1934 – 2014), recently donated to the MHA by her husband, Lawrence. Originally from Steinbach, Man., LaVerna became a teacher at around age 19, and later achieved a BA while raising four children in Minnesota.

For thirty years LaVerna published articles while researching a wide range of topics: church, community, mental health, food, and even the first moonwalk are all part of her collection. In an MHA Facebook post—Katie is floored that the MHA’s Facebook posts can reach tens of thousands of people—she writes that one of LaVerna’s articles entitled “’Women in the Soviet Union’ details how Russian women’s lives were different from the lives of western women, and in many ways how women in Soviet Russia had more rights and liberties than in Canada.” LaVerna and Lawrence lived in Russia from 1992-93, affording her an on-the-ground perspective.

Working day after day on such a personal collection, the archivist becomes an intimate companion with the character, says Katie. “Honouring their whole character, as women, as mothers, daughters, sisters, friends, students, career women, allows me to bring them to life in a different way.”

Her unfettered access to archival records produced an awe-inducing moment. On arrival at the MHA, “I wasn’t expected to be handed a box of materials that hadn’t been touched. It was humbling. ‘Are you sure I can even touch these?’ my internal voice asked Conrad. It feels so special to hold these things, like in a museum, being able to handle the artifacts.”

Often viewed as organizers and categorizers of information, an archivist’s role goes much deeper, says Katie. A recent item she wrote for the MHA’s Facebook page garnered almost 9.500 views and thirteen comments at the time of this writing. Her topic – the politics of memory – dealt with themes such as the powerful influence archivists have in selecting material to make public, and how an archivist’s empathy, positive or negative bias toward historical characters and their context in historical times, politics, and cultures, can shape a story in ways that are not intended or not truthful. “How do I archive without a political agenda?” is a question every archivist must ask themselves, she said.

When Katie Lynch wrote a Facebook post entitled “What does an archivist do?” she didn’t expect to get well over 9,000 views. Comments included:

“Thank Katie. You’ve opened my awareness to the roles of politics and empathy in archiving (and in historiography).” – Dr. Andrew Dyck, Assistant Professor of Christian Spirituality and Pastoral Ministry, Canadian Mennonite University

Katie is amazed at the reach of MHA in the Mennonite diaspora, through its online and social media presence, newsletter (The Mennonite Historian, a collaboration with the Centre for MB Studies) and lectures and presentations. When she helped set up the MHA’s venue for a lecture by Bernhard Thiessen on a warm summer evening this past July, she was amazed that seating capacity quickly maxed out. “Even U of M guest lecturers don’t draw as many people to an evening as Mennonite presenters do,” she said with a chuckle.

Challenges facing the archivist community include getting young people interested in their own family and cultural histories (she’s surprised by the intense day-to-day traffic at the MHA, but observes that its “mostly older people”), and the role of modern technology in the future of historical record keeping. “If someone were to archive my life, how would it be done? Would you take my phone and simply store it? How do you write on the back of a digital photo the who, what, why, where, when? And will those records even be retrievable in the future?” These are vexing questions facing all archivists today, said Katie.

Her work experience at the MHA has provided a degree of certainty for her academic future. “I came here not knowing if I wanted to do an MA in history, curatorial studies, or archival studies, but I’m pretty sure I want to pursue archival studies now. This is the first job I have ever had that I am excited about on Sunday nights, looking forward to my Monday back at work.” She will miss her work at the MHA when she returns to her studies in fall of 2019, but another future awaits.

Inspired by historical research of her family and her grandad’s deep roots in Ireland (he passed away in 2018 at the age of 92) led her to successfully apply for Irish citizenship, a possibility provided by Ireland’s government for those of Irish descent. What impact that may have on her future is unknown for now, but she notes that the possible adventures an Irish passport open up fuel her imagination.