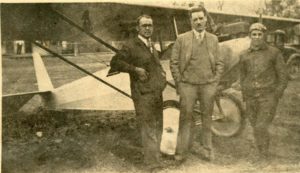 Another story of Mennonite aeronautic innovation has recently been discovered in a donation to the Mennonite Heritage Archives. In 1931, three Steinbach three men took the initiative to design and build an airplane in the automotive garage where they worked. “The whole grand adventure had begun… when the boys had run across the plans for a home built aeroplane in a 25 cent magazine. The plans were drawn by a man down in the U.S. named Pietenpol.” (“When Pietenpol Fever Swept Steinbach in 1932.” Carillon News Paper, June 7, 1957.).  The plane was christened after the initial creator of the airplane’s plans, although the schematics had to be substantially redesigned to accommodate the numerous unorthodox parts that were used, such as motorcycle tires and homemade instruments.

The photograph shows the original Pietenpol airplane that was taken on the day of its successful maiden voyage in 1932. “The men in the picture are, from left to right, Bill Wiebe, the co-designer, builder and later pilot; Frank Brown, a Goodrich Tire Co. salesman and ex-World War I pilot, and the man who flew the machine. At right is Frank Sawatzky, co-designer, and builder, and also one who did a good deal of flying” (“Pietenpol Fever.” Carillon News).

After a year of designing, building, and redesigning the plane to pass official Canadian airplane inspections, the three men prepared for the first test flight on a June afternoon in 1932 before a large crowd in Steinbach.

The ‘souped-up’ model A Ford motor surged to life when Bill Wiebe and Frank Sawatzky swung the prop. Frank Brown acted as the test pilot who was cheered on by the crowed as he jumped into the cockpit. The plane raced across the field and gradually climbed into the sky. The flight was the culmination of a year’s hard work and the graceful maneuvering, climbing, and diving of the Pietenpol plane validated their effort (“Pietenpol Fever.” Carillon News).

Mennonite history is rich with examples of hard-working country farmers taking initiative and successfully designing, building, and flying airplanes before the days of mass manufacturing and official flight training.

The full newspaper article is on file in the Mennonite Heritage Archives.