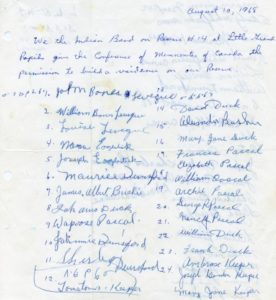 Not too long ago we received an email request from a longtime Mennonite Pioneer Mission worker who had been stationed in northern Manitoba. He was trying to find a 1968 letter written to the Conference of Mennonites in Canada (CMC) by Chief Leveque of Little Grand Rapids Reserve and was wondering if we could help him out. Sure enough, we were able to locate the letter in the CMC collection (volume 358, file 8).

The message itself is quite short: ‘We the Indian Band on Reserve #14 at Little Grand Rapids give the Conference of Mennonites of Canada the permission to build a residence on our Reserve.’ Accompanying the letter are the signatures of forty-nine Little Grand Rapids residents who agreed to welcome the Mennonites to live in their community.

What a powerful message. For a community to welcome outsiders in such a way shows a great amount of trust and compassion. It is an invitation that any guest should be honored to receive. To in effect say, ‘we want to know you,’ is as flattering and humbling a message as one can receive.

Such an opportunity allowed for Mennonites and the people of Little Grand Rapids to engage in each other’s culture. Mennonite missionaries offered their aboriginal neighbors the opportunity to better understand the Western way of life that was becoming more prevalent in a modernizing North America. In exchange, Mennonites learned a great deal of aboriginal culture, spirituality, and language.

At large, however, Canadian history demonstrates that the country has often taken this relationship for granted, undermining its hosts rather than honoring the invitation, as a guest should, to live together. This letter should remind us of the trust that was bestowed upon us as guests. The signatures show the vulnerability of a people extending a hand in a personal relationship. And altogether it is a snip-it of history that can remind us of the trust and honor that must be reciprocated in order to effectively engage in reconciliation.

This article was written by Jordon Zimmerly. Jordon is an intern at Mennonite Heritage Archives, doing his practicum as he finishes up his undergraduate degree at Canadian Mennonite University.