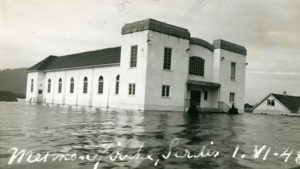 February 29, 2016 Volume 20 Issue 5 | In the spring of 1948, First Mennonite Church in Greendale, B.C., was inundated with water. Dikes had been built along the rivers some 50 years earlier, but they had suffered from neglect. During the winter of 1947 and early 1948, a lot of snow built up, and the late spring and fast melt triggered a sudden rise in run-off. The first dike was breached on May 26, with the water reaching its peak in early June. People were evacuated from Greendale. In 1955, the Greendale church building was destroyed by fire. What happened to the church records—did they survive the flood and fire?