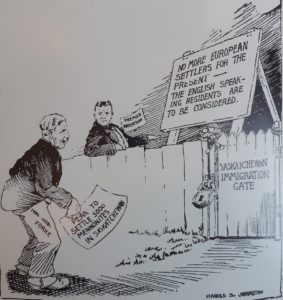 June 1919, the Canadian government banned Mennonites from entering Canada. In speaking to the proposed legislation, John Wesley Edwards said “Whether they be called Mennonites, Hutterites, or any kind of ‘ites,’ we do not want them to come to Canada… if they are willing to allow others to do their fighting for them… We certainly do not want that kind of cattle in this country!” Edwards went on to say Mennonites already in Canada should be deported.

This cartoon, while created a decade later, conveys some of these sentiments.

The Legislation cited “particular customs, habits, and modes of living” that were incongruent with Canadian values as the reason for the ban which was in place until there was a change in government in 1921. During the years 1918-1925 the Manitoba and Saskatchewan governments applied heavy-handed pressure on the Mennonite population to send their children to government-run schools, resorting to fining, jailing, and confiscation of farm implements, horses, cattle, and even food. In Saskatchewan alone, there were over 5,400 prosecutions.