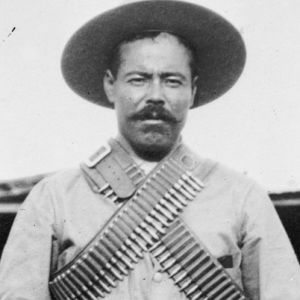 2016 is the centennial of the surprising interaction between a group of peaceful Mennonite farmers and the notorious bandit and general of the Mexican Revolution, Pancho Villa (Colton, Ray E. “Mennonites in Mexico Rewarded for Aid Given Villa, Bandit General.” Reading Eagle. Newspaper. October 13, 1933).

Nearly two centuries ago a group of peaceful, plain sect Mennonite farmers and ranchers immigrated to Hermosillo, Sonora, Mexico, a region plagued by bandits and instability. Despite these obstacles the Mennonite community flourished there due to their industrious and thrifty nature.

In 1910, the renegade lieutenant Pancho Villa was engaged in a rebellion against the Mexican government and led a contingent of fifteen bandits to rob a Mexican bank 25 miles from the Mennonite community in Sonora. Pancho Villa was pursued and wounded by Mexican Federal troops though he managed to escape until he eventually collapsed in the Mennonite village.

The Mennonites welcomed Pancho Villa into their home and nursed him back to health over a six-week period. Colton notes that the Mennonites “came to like this reckless man of adventure, who had never up to that time and even later, robbed a poor person” (35). Despite the language and cultural differences between them, the Mennonites decided to conceal Villa’s presence from two federal search parties that came into their village searching for the bandit leader.

Fully recovered after his six-week stay, Villa bade his benefactors good-bye and left. It is recorded that as he grasped the hand of the Mennonites who had befriended him, he said “Sometime I will be a great man. If ever you need me, send for me and I will come.” (Colton. “Mennonites in Mexico Rewarded.”)

Six years later that prediction had come true and in 1916 General Pancho Villa advanced with a contingent of 20,000 cavalry soldiers wresting border towns from the control of the government. It was at this time that General Villa was approached by the Mennonite leader who had previously saved his life and who informed him that a rival group of bandits led by the notorious bandit leader Zapata had raided their village, killed several of their men, and kidnapped five of their women.

General Villa immediately led 500 of his soldiers to the Mennonite Village and then proceeded to track down the raiding party. After a battle, Villa was able to successfully return the five uninjured Mennonite women to their community. Despite the troubling implications of Mennonite pacifists outsourcing violent actions to a willing third party, this unique story presents the co-operative interaction between two drastically different groups of people that were able to help each other in a time of need.