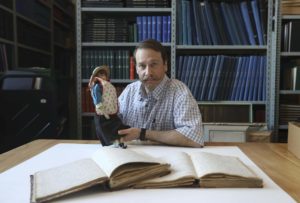 In 1927, Johannes Dyck escaped from the former Soviet Union with his wife and nine children.

Exit visas were difficult to obtain, and Mennonite emigrants such as the Dycks were not allowed to take large sums of money with them.

This was a problem for Dyck, who had been a prosperous farmer. So he devised an ingenious plan: he hid his money in a doll that belonged to his four-year-old daughter, Rena.

At a train station at the border, guards strip-searched the family to make sure they weren’t leaving with money. They went through all their clothing and luggage, but found no money. They reluctantly let the family go.

After coming to Canada, the Dycks settled in Saskatchewan, where they used the smuggled money to buy a farm and establish a new life. As for the doll, it ended up in the collection at the Mennonite Heritage Archives in Winnipeg — a testimony to one family’s escape.

This is one of the stories told by Mennonite Heritage Archives archivist Conrad Stoesz in his new weekly radio series, Still Speaking.

The goal of the show, which launched recently on the Golden West Broadcasting radio network, is to “tell the stories about the people, places and events preserved in our archives,” he said.

Through the segments, Stoesz hopes people will “learn about the past, and the important role of archives in society.”

He acknowledges it’s a bit of a stretch for him to be out in public via the programs.

“Archivists tend to be reserved, even introverted, not comfortable promoting themselves,” he said. “We enjoy more the process of collecting, preserving and researching. We’re not good at telling our own story.”

But that’s a problem, since archives increasingly need more public support to stay in operation, he said.

“It’s becoming more costly to operate archives with so much material coming in, plus the new technologies, digital preservation, and the new rules and standards to keep up with.”

These are all good things, “but they require more time, staff and money… the profession has not been good at promoting itself.”

Still Speaking will feature stories about how the Canadian Mennonite University archives came to own a copy of Mein Kampf by Adolf Hitler, and a Mennonite immigrant from Europe who arrived in Chicago, learned English in a bar, then went on to be part of the Klondike Gold Rush.

“It’s not what people think of when they think of the usual way Mennonites came to North America,” Stoesz said.

The Mennonite Heritage Archives website will display artifacts Stoesz talks about in the programs and will offer the episodes online.

“There are amazing stories in the archives,” he said. “They can give us something to think about. Together, we can listen to people of the past who are still speaking.”