Skip to content
Mennonite Heritage Archives > A Picture from Our History > S.S. Quebec 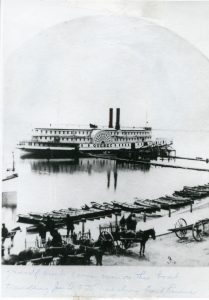 September 20, 2019 Volume 43 Issue 9 | The long trip from Russia to Manitoba took many days, several boats and trains. In 1875, some families traveling from Russia to Manitoba found themselves boarding S.S. Quebec in Fargo, North Dakota, USA. The steam powered paddle wheeler took them north on the Red River to the Mennonite East Reserve. Sometimes they had barges in tow. These large, fuel hungry boats had to stop along the way to harvest trees from the river bank to fire the boilers and provide steam energy. People have used meandering rivers as major transportation routes for thousands of years, but travel was slow. Train tracks could be laid straighter, carry locomotives hitched to many cars, and could operate year-round.  Soon river boats faded from use. What forms of transportation were used in the migration to Mexico, Belize, Paraguay, and Bolivia?