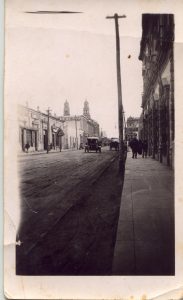 October 4, 2019 Volume 43 Issue 10 | This Chihuahua street scenes circa 1923 was taken by Cornelius Krause on his visit to Mexico. However, explorations for migration south began much earlier – and endured several disappointments. Mennonites from Saskatchewan and Manitoba had heard about possible religious freedoms they were seeking in Argentina and Brazil, but delegate visits to these countries in 1919 disappointed their hopes. Although Paraguay was under consideration, it was deemed impossible and hope was lost at this time. In 1920, an offer of 200,000 acres of land in Mississippi, U.S.A, progressed to the point that emigres names were listed along with how much land they hoped to obtain. Leaders collected deposits of $2/acre, but then suddenly found the US border closed to Mennonites, for reasons they never learned. Around this time, a group from Hague, Saskatchewan found promise in Mexico, while groups from Swift Current and Manitoba had heard about the possibility for religious freedom in Quebec, but this was abandoned when they could not get federal government approval from Canadian officials. After several delegate visits to Mexico, leaders announced on Sept. 21, 1921, that they had succeeded in arranging a land sale ($8.25/acre USD) along with the required religious freedoms.