Skip to content
Mennonite Heritage Archives > A Picture from Our History > S.S. Peruvian 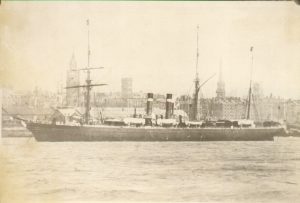 November 29, 2019 Volume 43 Issue 13 | The S.S. Peruvian was a steam and wind powered ship that carried Mennonites from Europe to Quebec City.  The Peruvian was built by the Allan Ship Line based in Liverpool, England.  It was 312 feet long and 38 feet wide and weighed 2549 tons. Launched on August 31, 1863, she took her maiden voyage in 1864 from Liverpool, England to Portland, Maine.  In 1874 the ship was rebuilt with new engines and made even bigger, lengthened to 373 feet long, and an increased weight of 3038 tons.  Between May 20, 1875 and September 28, 1876, the ship made nine trips between England and Quebec City carrying passengers including many Mennonites.  After 155 trans-Atlantic trips the ship was broken up in 1905 in Italy.