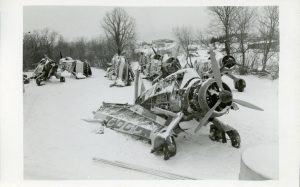 March 18, 2019 Volume 23 Issue 6 | “They will beat their swords into plowshares and their spears into pruning hooks. Nation will not take up sword against nation, nor will they train for war anymore.” These famous words from Isaiah 2:4 have been enacted in various ways over the years. Sculptures have been created, jewelry made and roads built with former military machinery. By the end of the Second World War, Klaas Brandt of Steinbach, Man., learned of decommissioned military aircraft in the province. He determined that the Lysander airplanes had the most usable material and purchased 27 to bring to Steinbach. He melted down their 890-horsepower aluminum engines and made farm equipment with the metal.