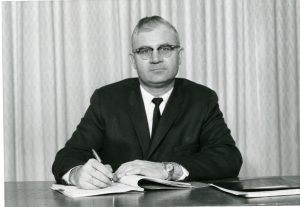 February 17, 2020 Volume 24 Issue 4 | You can find all kinds of things in the archives, including humour.  In a report dated Jan. 25, 1963, Rev. David P. Neufeld wrote, “During the course of the last year I have come to sympathize with a man who was called to be the executive secretary of one of our larger denominations [U.S. Protestant Episcopal Bishop, Stephen F. Bayne Jr.]. . . . When asked how he felt about his new job, he commented, ‘I feel just like a mosquito that flew into a nudist camp. . . . I know what I ought to do, but I don’t know where to begin.’ ” In 1961, Neufeld (1919-1982) moved his family to Winnipeg, where he became the first executive secretary for the Conference of Mennonites in Canada.