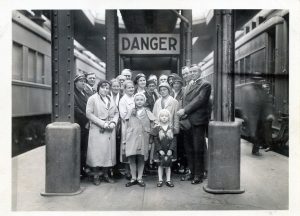 June 20, 2016 Volume 20 Issue 13 | Alexander Fast (1888-1942), front row right, and his second wife Selinde Fast (1894-1973) fled to Germany from Russia during the Russian Revolution and were immigrants to Canada in 1928. In this photo, taken in 1933, they are at the Winnipeg train station with friend C.F. Klassen (behind Alexander), leaving for British Columbia. Mennonite immigrants have not always been welcomed in Canada, being considered a danger because they came from a communist country even after passing government screening of the day. Sadly, our world continues to produce refugees.