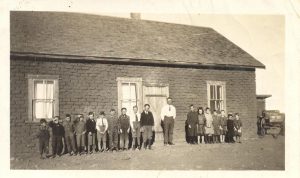 March 6, 2020 Volume 43 Issue 19 | This photo depicts students and their teacher in front of the school house in the Santa Clara Colony, Mexico sometime in the 1920s. Changes to schooling requirements in Canada was the main reason for Mennonite migration south during this time period. Mennonites in Manitoba had already felt the hand of government interfere with their colony school system as early as 1890 – the beginning of a long battle to assimilate newcomers to Canada by enforcing the English language through legislation. Then in 1907, all Manitoba schools were required to fly the union jack flag, the national flag of the United Kingdom. Around 1920, a large group of Old Colony Mennonites felt they had already given up too much control of their schools as laws put forward in 1917 and 1918 began to enforce teaching in the English language, required publicly inspected schools, and laid out acceptable religious instruction. This was the last straw for these Mennonites. Within a few years they had secured freedom of education promises along with land reserves in Mexico. In the early 1920s, about 6,000 Mennonites had moved to Mexico. Mennonites were not the only ethno-religious group to oppose the English teaching language requirement in Manitoba. French speaking Catholics fought the change for many years. Petitions for native language instruction in schools were put forward by groups of Ukrainians, Poles, Swedes, and even some Scots who wanted instruction in Gaelic. But moving to Mexico only delayed the matter of freedom of education. In 1936-37, Mexico shut down Mennonite schools. Threats of emigration eventually won the day and schools were reopened under Mennonite leadership.