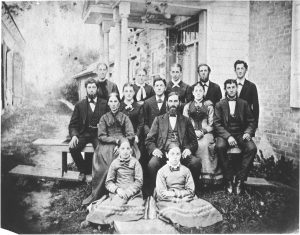 October 9, 2017 Volume 21 Issue 19 | Jacob Y. Shantz (1822-1909) of Berlin, Ont., (now Kitchener), with his family. Shantz was involved in fruit growing and maple-sugar production. He was a building contractor and industrialist, but is also remembered for his role in the establishment of Mennonite communities in Manitoba. The Manitoba village of Shantzenfeld is named in his honour. Shantz wondered if fruit could be grown in Manitoba. In 1877, he sent 424 apple, 313 pear, 300 plum and 300 cherry trees to Manitoba. Two years later, he was pleased to see a harvest of apples. Have any of these varieties survived in Manitoba today?