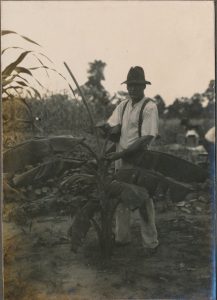 January 16, 2017 Volume 21 Issue 2 | Cornelius R. Funk shows plant growth in his new home in Menno Colony, Paraguay. In 1926, Funk and 1,785 other Mennonites from Saskatchewan and Manitoba left for Paraguay because they did not trust the Canadian government. New York banker Samuel McRoberts helped them sell their land and acquire new land. McRoberts saw successive waves of immigration as a financial opportunity. A series of 252 photos were taken from 1926 to 1929, showing the progressive and successful farms of the new immigrants. Conflict arose over the use of the photos. McRoberts wanted to use them to spur on more emigration, while masking the harsh climate and the fact that it took until 1928 for the Mennonites to get onto their new land. Meanwhile, 187 people had died in Paraguay and another 371 people had returned to Canada.