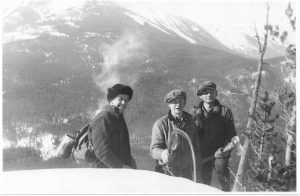 April 27, 2020 Volume 24 Issue 9 | Conscientious objectors (COs) played an important role on the Canadian volunteer scene during the Second World War. Among the assignments was work in the forests around Banff, Alta., clearing trees. Surprisingly, much of the parks system in Canada was established by these people, some of whom were less than willing to be there or do the work. Among them were the unemployed, prisoners of war and Mennonite COs. Pictured, from left to right: Bill Elias, David T. Wall and John Knelsen stand on a hillside in the wintertime in Banff National Park cutting trees as a part of their CO work.