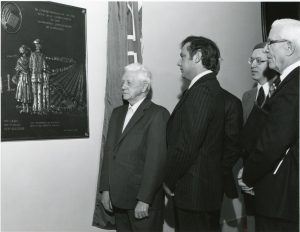 July 22, 2019 Volume 23 Issue 14 | New Canadian initiatives around multiculturalism in the 1970s—celebrating anniversaries like Canada’s centennial in 1967, Manitoba’s in 1970, and the arrival of Mennonites in Manitoba in 1974—created a new energy and appreciation for history in Canada. During these years, the Mennonite Heritage Centre and the Archives of Ontario hired permanent staff. Energy was put into founding Mennonite archives in Saskatchewan, Alberta and B.C. Family and community history books were written, capturing many stories. Public commemoration is an important role in maintaining community. Pictured in 1974, John C. Reimer, left, then premier Ed Schreyer, and Rev. Gerhard Lohrenz unveil a plaque commemorating the Mennonite centennial in Manitoba in the Manitoba legislature.