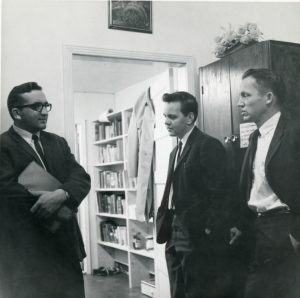 October 28, 2019 Volume 23 Issue 19 | Can you help identify these three men at Bethel Bible Institute (BBI)? Is John Poettcker in the centre? The formation of Bethel in Abbotsford, B.C., was proposed in 1937 at the ministers conference of the Conference of United Mennonite Churches of B.C. with the hope it would be “the guardian of traditional Mennonite faith.” Its first year had 22 students taking classes in Bible, church and Mennonite history. In 1943, the United Mennonite Conference assumed full responsibility for the school, and plans were underway for new classroom and dormitory buildings. By 1953, every congregation in the conference had at least one student at Bethel. Concerns over some faculty’s positive views of fundamentalism and dispensationalism in the 1950s eroded support for the school. In 1970, Bethel Bible Institute merged with Mennonite Brethren Bible Institute to become Columbia Bible College.

Canadian Mennonite readers have helped Conrad Stoesz at the Mennonite Heritage Centre Archives in Winnipeg identify these three men. Left to right are BBI teachers Peter Nickel and John Poettcker. Frank Dyck is far right and his role at BBI is unknown.